This article will cover the basics of the human skull anatomy including the skull bones and skull topography.

The human skull (latin: cranium) is the skeleton of the head composed of 22 separate bones, most of which are paired. The main function of the skull is to provide protection for the brain and the sensory organs connected with it. The skull also incorporates the upper parts of the digestive (mouth) and respiratory tracts (nose), and supports the soft tissue of the head.

The border of the neurocranium is marked by the following structures:

The skull may also be divided into a calvarium that is robust and surrounds and protects the brain and a facial skeleton that is more delicate, composed mostly of thin-walled bones, some of which house air-filled cavities known as the paranasal sinuses.

The space within the skull is known as the cranial cavity and it contains the brain, the intracranial portions of the cranial nerves, the blood vessels supplying the brain with arterial blood and draining the venous blood, the meninges covering the brain and the cerebrospinal fluid

There are also three tiny bones, the auditory ossicles (malleus, incus and stapes), located within each middle ear, which is housed in the skull, specifically, within the right and left temporal bones.

Other sutures of the skull include the:

There is only one synovial joint between bones of the skull. It is the temporomandibular joint (TMJ), which is formed between the head of the mandible and the mandibular fossa of the temporal bone. The movements permitted by the TMJ include depression and elevation of the lower jaw, moving the jaw forward and backward, side to side, as well as rotating movements, for example, for chewing.

Buy Visual Guide To The Anatomy Of The Skull NOW! 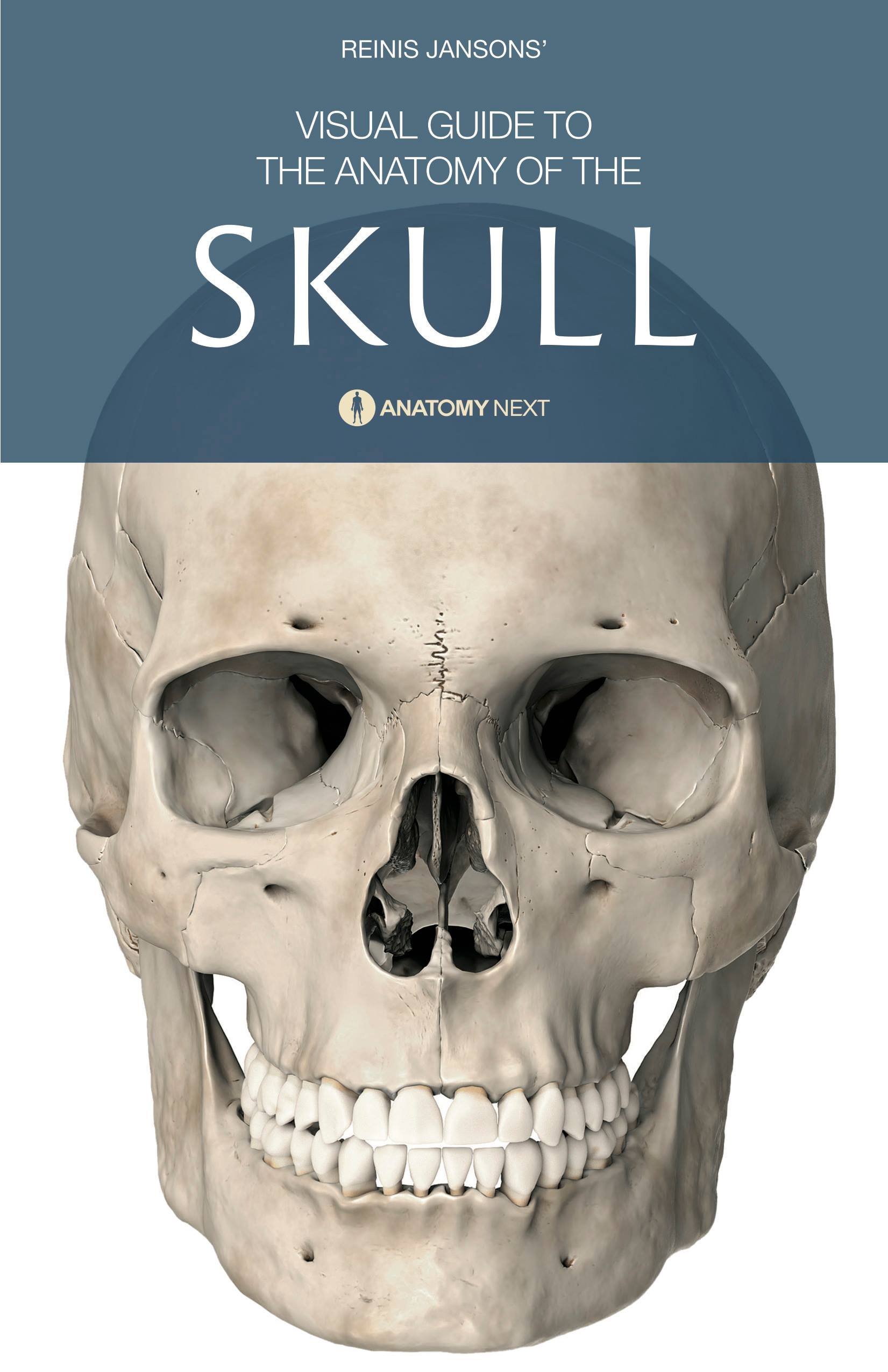 The skull is rich with openings, including foramina and canals, that serve mostly as passages for cranial nerves, their branches and accompanying blood vessels. Nerves and vessels form neurovascular bundles, which may be harmed at the sites of skull openings by pathological process or trauma.

Listed below are the most important openings of the skull with the parts of the skull they connect and the structures they carry.

Several bones of the skull contain air-filled spaces known as the paranasal sinuses. There are four sets of paired paranasal sinuses that are named according to the bone in which they are located, and these are:

There are several important skull topography regions that must be covered, including the:

The cranial base (also known as base of skull, skull base; latin: basis cranii) is the most inferior part of the skull forming the floor of the cranial cavity. The cranial base is formed by five bones: ethmoid, sphenoid, occipital, paired frontal, and paired temporal bones.

The internal cranial base (latin: basis cranii interna) is bounded anteriorly by the parts of the frontal, sphenoid and ethmoid bones, laterally by the parietal and temporal bones, and posteriorly by the squamous part of the occipital bone. The internal cranial base contains the brain, the intracranial parts of cranial and spinal nerves, meninges, blood vessels, as well as the cerebrospinal fluid.

The internal cranial base is subdivided into three distinct regions or fossae - the anterior, middle and posterior cranial fossae. Each cranial fossa houses a different part of the brain.

The anterior cranial fossa (latin: fossa cranii anterior) lies at the highest level of the internal cranial base and is formed by the cribriform plate of the ethmoid bone, the orbital plate of the frontal bone and the lesser wings of the sphenoid.

The anterior cranial fossa contains the frontal lobe of the cerebral cortex, the olfactory bulb and olfactory tract, and the orbital gyri.

The middle cranial fossa of the skull accommodates the pituitary gland and the temporal lobes of the cerebral cortex.

The posterior cranial fossa (latin: fossa cranii posterior) lies at the lowest level of the internal cranial base and is the largest of the three cranial fossae. It is formed by the occipital bone, the posterior surface of the petrosal part of the temporal bone, and the mastoid angle of the parietal bone.

The brainstem and cerebellum lie within the posterior cranial fossa of the skull.

Opening presented on the bony palate include the incisive foramen, as well as greater and lesser palatine foramina. The superior alveolar arch is formed by the alveolar processes of the maxillae and it contains the dental alveoli or sockets for the teeth.  The choana is the paired posterior aperture of the nasal cavity that opens into the nasopharynx.

The posterior part of the external cranial base is mainly formed by the occipital bone. It features such opening as the single foramen magnum and paired jugular foramen, hypoglossal canal, condylar canal, as well as the small openings mastoid canaliculus and the canaliculus for the tympanic nerve.

Several openings found in the walls of the infratemporal fossa connects it with different areas of the cranial cavity, such as the foramen ovale, foramen spinosum, petrotympanic fissure, and pterygomaxillary fissure. These openings transmit particular nerves and blood vessels.

The pterygopalatine fossa (latin: fossa pterygopalatina) is a cone-shaped, bilateral depression below the apex of the orbit on the lateral side of the skull, located between the maxilla, the sphenoid and palatine bones.

The walls of the pterygopalatine fossa present several canals and foramina that connect the fossa with other regions of the skull like the orbit, nasal and oral cavities, middle cranial fossa, infratemporal fossa. And these openings transmit particular nerves and blood vessels. Openings seen in the pterygopalatine fossa include the sphenopalatine foramen, infraorbital fissure, pterygomaxillary fissure, greater palatine canal, foramen rotundum, pterygoid canal, and pharyngeal canal.

The orbit (or orbital compartment, latin: orbita) is a paired skeletal cavity that is located in the skull on either side of the root of the nose. The orbit houses and protects the eye and its accessory structures. Anteriorly each orbit opens on the face with an approximately quadrangular shaped orbital opening.

The medial wall of the orbit is formed by the:

Posteriorly: body of the sphenoid posteriorly,

inferiorly: orbital plate of the maxilla.

The lateral wall of the orbit is formed anteriorly by the frontal process of the zygomatic bone and posteriorly by the orbital surface of the greater wing of the sphenoid.

The orbit contains the eyeballs and their associated structures, such as nerves (optic nerve, oculomotor nerve, trochlear, ophthalmic and maxillary nerve) , blood vessels (ophthalmic artery and vein) and extraocular muscles. Any space within the orbit that is not occupied with specific structures is filled with orbital fat that cushions the eyes and stabilises the extraocular muscles.

The nasal cavity (or cavity of nose, latin: cavum nasi, cavitas nasi) is an irregular, bilateral air-filled space located within the skull above the roof of the mouth forming the internal part of the nose. The nasal cavity serves as the initial part of the respiratory tract, it is lined with mucous membrane, which also houses olfactory receptors.

The nasal cavity is a bony compartment that is split into two symmetric compartments by the nasal septum, and it has a roof, a floor and four walls that are all formed by bones of the skull.

The roof of the nasal cavity is formed by the cribriform plate of the ethmoid and the anterior aspect of the body of the sphenoid. The floor is formed by the palatine processes of the maxillae. The medial wall of the nasal cavity is represented by the bony nasal septum, which is composed of the vomer and the perpendicular plate of the ethmoid. (the vomer is a small, thin bone forming the posterior part of the nasal septum. The vomer is attached to the rostrum of the sphenoid)

Each lateral wall of the nasal cavity is formed by the following structures:

As other regions of the skull, the nasal cavity serves as a passageway for several nerves and blood vessels of the head, and thus it presents a lot of openings in its bony walls, such as the small openings of the cribriform plate, sphenopalatine foramen, incisive canal, and the opening of the nasolacrimal canal. The nasal cavity is also connected with the paranasal sinuses with openings to the frontal, maxillary and sphenoidal sinuses, as well as to the ethmoidal air cells.

BUY Visual Guide To The Anatomy Of The Skull

The periosteum is a layer of dense connective tissue covering the surfaces of the bones, including the skull. It consists of two layers:

The outer layer is a tough fibrous layer formed by the collagen fibers. This layer also contains many nerve endings - therefore pain sensation can be triggered by the damage to this layer.  Periosteum of the skull is also the innermost layer of the scalp. The layers of the scalp from the most superficial to the innermost are the: